Ocean modelling researchers from the MaREI Centre for Energy, Climate and Marine at the National University of Ireland Galway (NUIG) are using wave data collected at the Galway Bay Marine and Renewable Energy Test Site and the outputs from NUIG wave models on the site to characterise the wave resource at the site according to new international industry standards. Wave characterisation studies involve statistical analysis of wave data to provide descriptions of the waves typically experienced at a site. This information is particularly useful for wave energy device developers to help them design their devices prior to testing. This project will produce a wave characterisation report in accordance with IEC 62600-101 which can be provided to potential test site clients.

Wave energy is the most concentrated form of renewable energy on earth with a power density much higher than solar and wind resources. The west coast of Ireland sits on the edge of one of the world’s largest wave energy resources and it is therefore in Ireland’s interests to help the development of the wave energy industry. The development of wave energy converters requires staged testing beginning at small scale in labs and progressing to larger scales at sea. The Galway Bay Marine and Renewable Energy Test Site is a ¼-scale wave energy test site.

Wave characteristics (e.g. their height, period, direction and energy) vary significantly both seasonally and annually. Understanding the types of wave that are typically expected at a location can help wave energy device developers to design their devices to capture as much energy as possible and to survive the forces generated by the larger waves. With this in mind, the International Electrotechnical Commission (IEC) has developed a technical specification for the assessment of the wave resource - IEC 62600: Marine energy-Wave, tidal and other water current converters - Part 101: Wave energy resource assessment and characterisation (IEC-62600-101) - which presents a series of recommendations for standardising wave resource characterisation. For the first time, this project adopts the standard to conduct the resource assessment at the site and will be used as a learning experience to assess the ease of applicability of IEC-62600-101 and provide feedback to the IEC Committee so that future iterations of the specification can be improved. The IEC protocol specifies a minimum historical dataset of 10 years (at least) of hourly values of wave height, period and direction. To augment the long time period of data available from the SmartBay site the NUIG research team developed a wave modelling system to generate 15 years of modelled wave data. The SmartBay measured wave dataset is being used to validate the modelled wave data according to IEC specifications. The model (shown in the figure) comprises a coarse resolution model of the north-east Atlantic and high-resolution domains covering the Galway Bay Marine and Renewable Energy Test Site (GBTS in the figure) and the full-scale test site being developed by Sustainable Energy Authority of Ireland near Belmullet in Co. Mayo (BA and BB in the figure).  A full-wave characterisation study will be conducted according to IEC protocol and the results documented in a wave characterisation report which will be provided to the site operator. 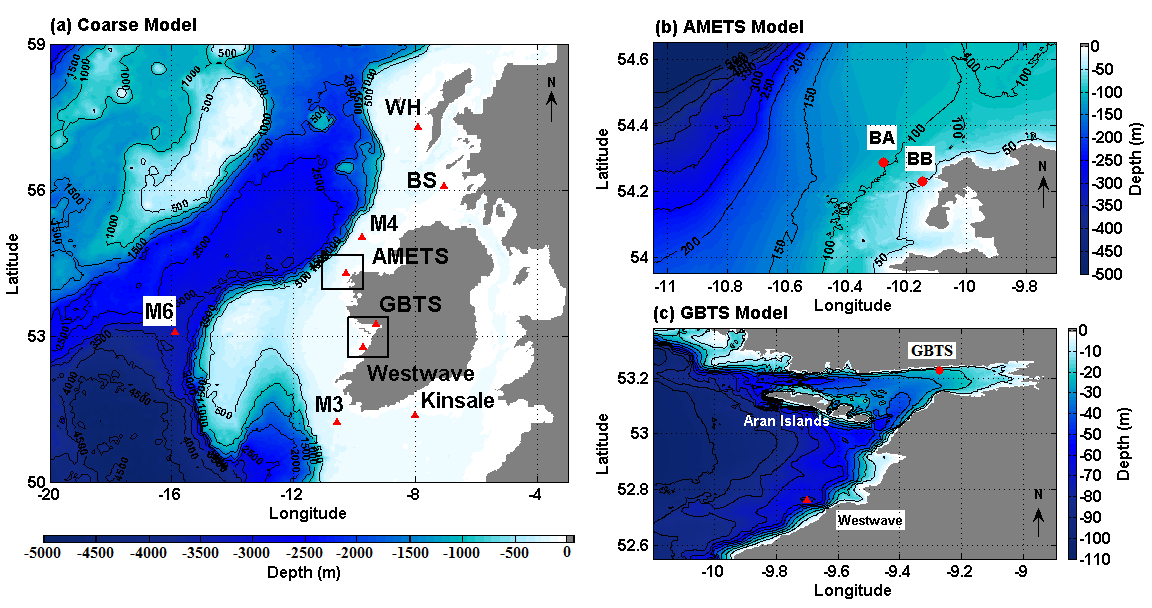 “Over the years, many different approaches have been used to conduct wave resource characterisations. For wave energy device developers, it is important that test sites, in particular, use a standardised approach for resource characterisation as they may have to use a number of different test sites during the development of their technology due to factors such as the scale of their device, site availability and funding timeframes. Projects like this which assess the usability and robustness of standardised protocols are important to ensure that they are fit for use.", said Dr Stephen Nash, lead Principal Investigator and Head of the Marine Modelling Group (MMG) at NUI Galway.

“Ocean models have an important role to play in the sustainable harnessing of wave and tidal energy. Validation of model results by comparison with measured data is critical to ensure confidence in model results. The long-term wave dataset provided by SmartBay has been instrumental in assessing the accuracy of our wave model and wave device developers will be able to use the wave characterisation report for the test site knowing that the data is accurate.” said Dr Lulia Anton, Postdoctoral Researcher within the pro

John Breslin, General manager at SmartBay Ireland also commented “It is crucial to have the most accurate wave characterisations possible for Irish Test Facilities. This will allow developers who are validating wave and floating wind devices at the SmartBay Test Site to be confident that the device under trial is correctly scaled to the conditions it will experience in Galway Bay initially, and Belmullet thereafter”.